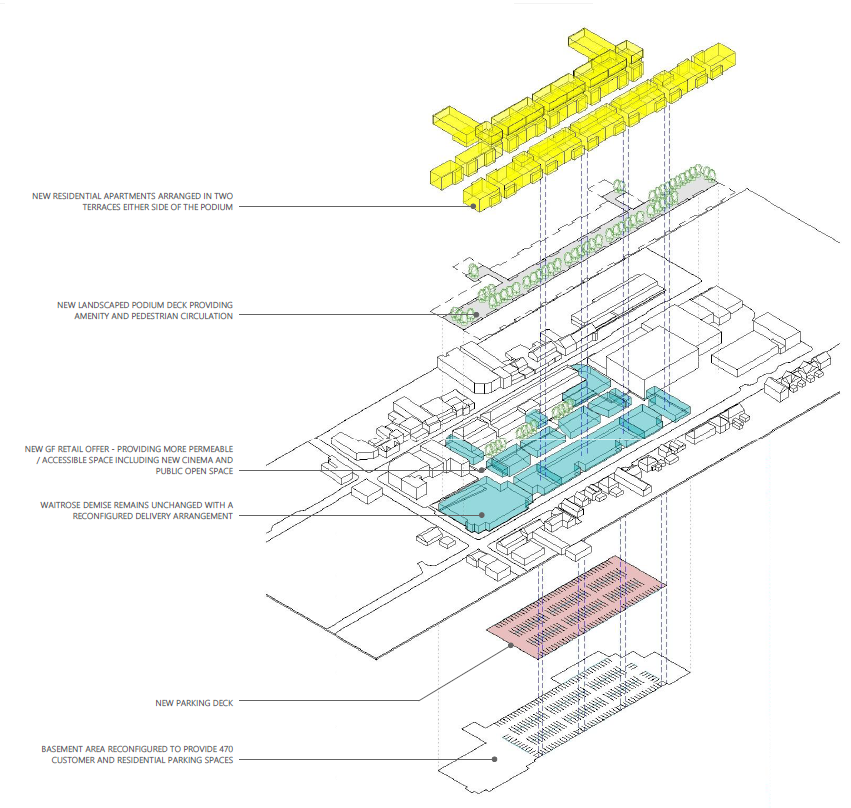 We are delighted to announce the release of a study into Fleet regeneration undertaken on behalf the Rural Hart Association. This study shows that it is feasible and desirable to redevelop Hart Shopping Centre as a stepping stone to wider Fleet regeneration.

The benefits of the proposed scheme are as follows:

The proposals respect the sight lines of the existing Hart Shopping Centre, so it shouldn’t be intrusive.

The genesis of this idea came at the January Council meeting, where the Graham Cockarill, portfolio head of Planning said they were pressing ahead with the unnecessary new town, because the regeneration of Fleet was an “impossible pipedream”. These proposals should give Hart Council food for thought. We would strongly recommend that Hart takes these proposals seriously and get behind a plan to regenerate Fleet. Together we can make a vibrant town and help Hart remain one of the best places to live in the country.

Next steps for Fleet Regeneration

These proposals will be formally submitted to Hart Council and Fleet Town Council early this week. We are also seeking for these proposals to be discussed as part of the upcoming Local Plan examination.

We think these proposals could be viewed as the first project of a larger programme to regenerate Fleet. The next site on our own target list would be the whole Civic area including Hart’s Offices, the library and the Harlington. There should be no need to disturb either Gurkha Square car park, or Bakers. The Fleet neighbourhood plan also targets this area for improvement. It is time for Hampshire, Hart and Fleet councils to get round the table with sensible planners like Lambert Smith Hampton to come up sensible plans for the future.

This is a much better idea than to concrete over our green fields with an unnecessary new town.

The Rural Hart Association (RHA) has made very good progress over the summer and we are now fully prepared to play our part in opposing a New Town at the Examination in Public (EIP) which starts on 20 November.

You will remember that the RHA decided to concentrate its resources on the single issue of Fleet regeneration. We set out to demonstrate that it was feasible for Fleet Town Centre to be regenerated with a mixed-use development (residential, retail and leisure) which would provide housing as well as reviving the commercial viability of Fleet as Hart District’s largest town.

The issue of Fleet Regeneration is of vital importance because Hart District Council’s justification for a New Town rests on their assertion that it can’t be done. In a bit more detail the argument runs like this:

In May we appointed Lambert Smith Hampton to undertake a Design Study to investigate the feasibility of a mixed-use regeneration of Fleet’s Hart Shopping Centre. This study is now complete and the main conclusions of the Study are:

In summary, we have demonstrated that Hart’s claim that Fleet cannot be regenerated is utterly wrong. Hart Council is dominated by CCH councillors whose agenda is to stop Fleet being regenerated at all costs. As a result the draft  Local Plan condemns Fleet in particular (and the whole Hart in general) to long-term economic decline.

We hope that on the basis of this Study, the Inspector will insist that the New Town is removed from the Local Plan and that a large-scale regeneration of Fleet is undertaken instead. Hart should be guiding the district towards a bright future in which Fleet becomes a modern, vibrant and highly successful town surrounded by beautiful countryside and rural villages.

You can find the full study in David Turver’s excellent WeHeartHart website at www.wehearthart.co.uk. The We Heart Hart blog also provides a full commentary of the progress of the Local Plan and its well worth reading.

Thank you all for your generous contributions to the Design Study and to funding LSH to attend the Examination in November/December. I think that we have built a very strong case, and I believe that we have a good chance of preserving all of our green fields for many decades to come.