Much is being made of the supposed infrastructure benefits of a new town in Hart District.  We believe these benefits are a mirage and have written elsewhere about the astronomical £300m costs and the pitiful expected developer contributions. This post is about the massive infrastructure funding deficit facing our existing communities and how developer contributions won’t make a bit of difference to this and how a new town will make things worse.

Back in October 2014 Hart Council produced an infrastructure delivery schedule that set out the current deficit, split by type and area.  This shows a deficit of £78m not including healthcare facilities.  The breakdown is shown by type and area in the images below: 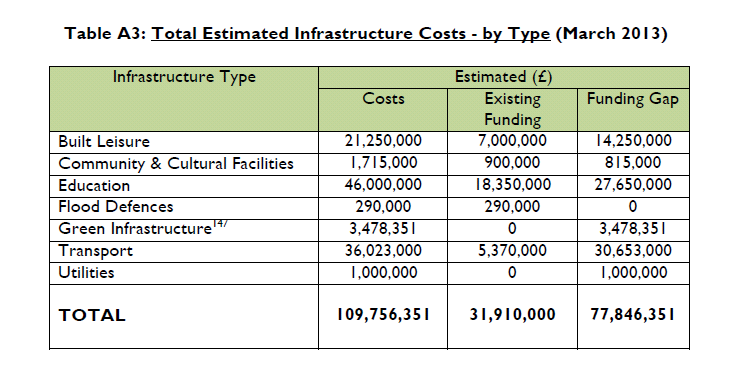 Key quotes from the document include:

“It is therefore reasonable to conclude that it is unlikely that there will be sufficient future funds, from both capital programmes and developer contributions, within the plan period, to deliver all of the projects listed in the HCC Transport Statement”

“Developer contributions are, however, by no means the only source of funding for infrastructure providers. Local Authorities, for example, could fund the costs of meeting future unmet community infrastructure needs, in addition to developer contributions, through a variety of means including Infrastructure Provider Capital Programmes, Council Tax, Prudential Borrowing, New Homes Bonus, Grants (Government and private), Capital Receipts, Council Reserves and Local Economic Partnership (LEP) funding”

“The South West Main Line (SWML) outer trains, which serve Hart, has significant forecasted future peak crowding, with a capacity shortfall of over 6,100 passengers in the high-peak hour, even if every main line train is at maximum length”

As can be seen, Fleet, Church Crookham and Hook have the largest deficits and there is no way that developer contributions are going to make a dent in these, let alone cover the extra infrastructure costs of a new town.  Nobody has yet explained how these deficits will be fixed by building a new town.  On the contrary, a new town is likely to starve these areas of much needed investment.