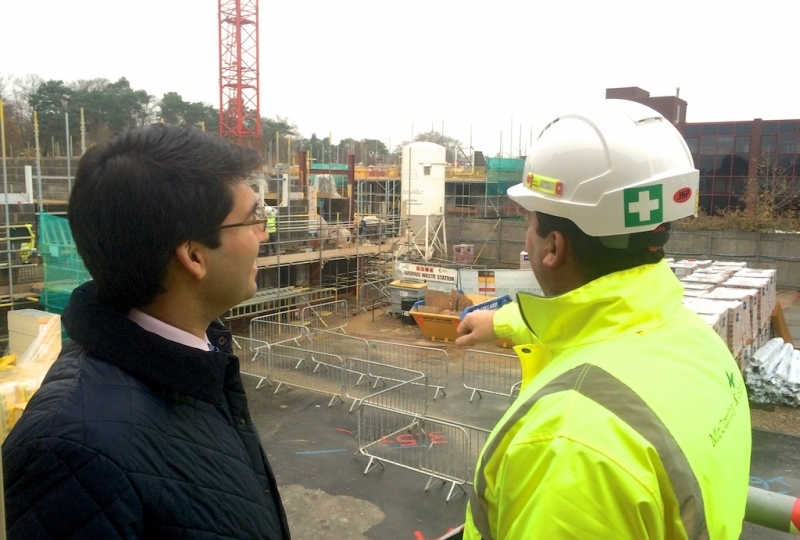 Ranil Jayawardena at a brownfield site in Hampshire

Local MP, Ranil Jayawardena has published a new article re-stating his preference for brownfield regeneration and emphasising the need for proper infrastructure to be delivered alongside housing and calling on local councils to take a more active approach.

This is the key passage from his article:

This is an important point. It is clear to me that infrastructure improvements are an absolute necessity for any development – and Government has a role in this part of the equation.

I welcome the Hampshire Combined Authority proposal, specifically a ten-year Transport Investment Fund to be used to significantly improve our roads and public transport. This is a good start, but to plan our future, we must consider the past. We should be thinking about the existing infrastructure deficit also and how this can now be mitigated, so that existing residents end up with a better deal.

It is only right that infrastructure is delivered alongside any new development, rather than leaving communities hoping for improvements in the future, when our roads are already jammed and our trains are already crammed.

There is another way to fund infrastructure, of course. If regeneration is led by local government, through its ownership of the land (whether by private treaty or CPO), the profit that local government makes from the redevelopment can be invested in infrastructure or for the benefit of taxpayers. This is particularly important with brownfield sites, since sites may not be viable – after taking into account a developer’s profit – if they are also required to pay CIL/s106 at the normal level and it would not be good to see large-scale brownfield regeneration without any infrastructure improvements.

Through this vision of active local government, brownfield regeneration genuinely benefits local people, rather than shareholders of a developer, through improved infrastructure and lower Council Tax.

I should probably say that I accept, often, brownfield sites are not in common ownership and, even if they are, the landowner doesn’t wish to develop them. To my mind, however, that is not a reason for brownfield to be put in the ‘too difficult’ pile. Rather, I believe local government has a role to outline how it wishes to comprehensively improve the existing built environment, through purchasing and redeveloping land if not already in its ownership

We wholeheartedly welcome Ranil’s new intervention and we can only hope that Hart District Council are listening. We urge you to sign Ranil’s petition using the button below.