A CCH Councillor has said that it would be “political suicide” to impose more housing on Hart than is needed.

However, the same Councillor has also outlined her party’s plans for Shapley Heath that amount to the very same “political suicide” she mentions. 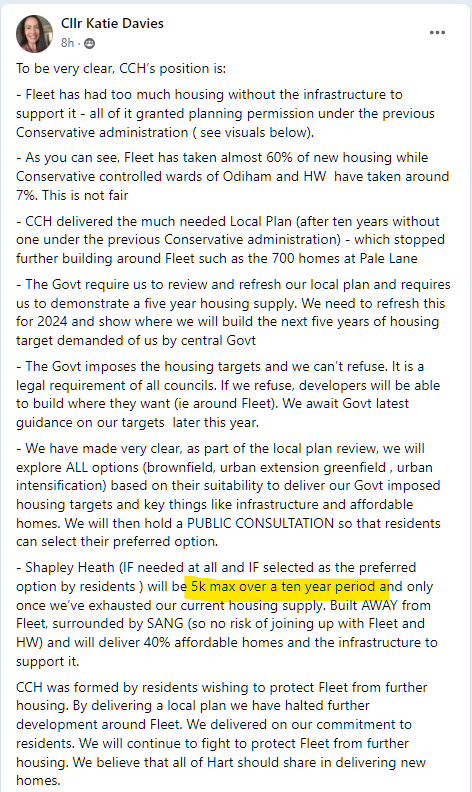 CCH as a party are still pushing the very same development that was removed from the Local Plan by the Inspector because it was not required to meet our housing targets out to 2032. In their bid for Government funding they even claimed they would deliver Shapley Heath “in addition to” the requirements of the Local Plan.

Moreover, Councillor Davies has proposed a far faster rollout for Shapley Heath than was proposed in the Council’s bid for funding. The plan they put forward then ran for 16 years from 2024 to 2040, with a steady state run rate of 360dpa.

CCH are now proposing the development takes place over 10 years. Simple arithmetic would indicate an average build rate of 500 dpa. The pace of this single proposed development is nearly twice the latest Government target of 286dpa.

They have said that they will “explore all options”. However, they have spent over £700K on Shapley Heath since FY19/20 and delivered nothing of substance. They have not formally considered any other option.  This is in direct contravention of the Inspector’s findings:

I am of the view that a significant level of further supporting work would be required for Policy SS3 [Shapley Heath] to be found sound in its current form, which would need to include appropriate and proportionate area/site assessments, infrastructure considerations, viability testing, evidence in support of deliverability and further SA work, which would need to be done in an impartial manner with sufficient evidence to support its findings and comparisons with alternative options

They are proposing to consult on the same proposal that:

They will do all this without properly considering any other option. Political suicide indeed.