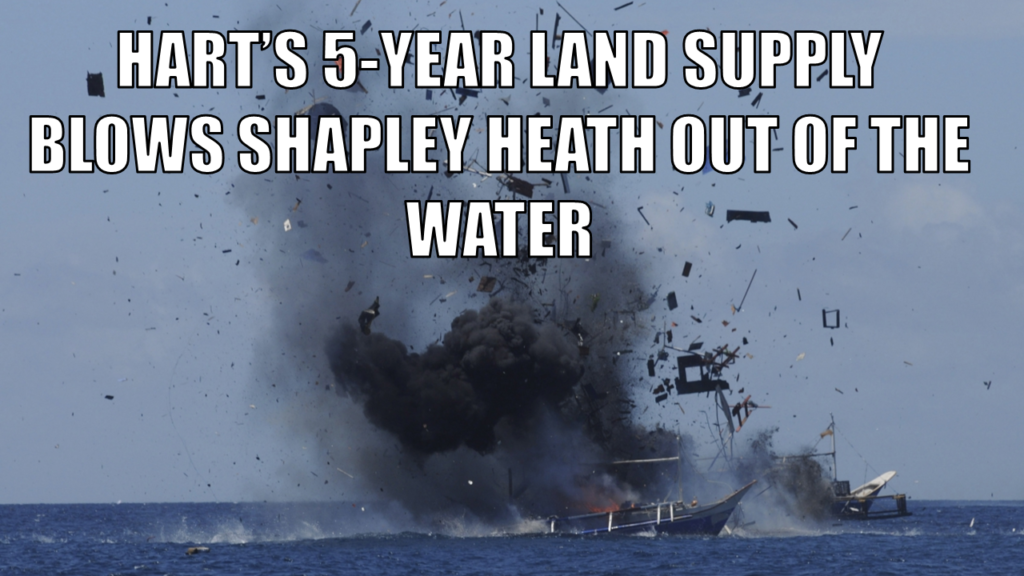 5-Year Land Supply Blows Shapley Heath Out of the Water

A new announcement was made at Council on Thursday, in response to one of our questions. They announced that the new 5-year land supply shows Hart has over 10 years of land supply. Not only that, the Housing Delivery Test will be met up to around 2028.  Their whole justification for pursuing Shapley Heath in the first place was as an “insurance policy”.

Unfortunately, we were unable to be at the meeting, even remotely. However, the Chairman agreed to read out our questions for us. The announcement and questions are shown below, with short video clips of the answers. They covered:

There’s another clip of Councillor Kinnell flouncing out of the meeting after being asked some straightforward questions about the Dog Warden service.

5-Year Land Supply Blows Shapley Heath Out of the Water

Here is the announcement about the 5-year land supply:

The key points to note are that the Housing Delivery Test will be met until at least 2028 and Hart has 10 years of land supply.  The full document can be found here.

Hart needs a revised Local Plan in place by five years from adoption, which is April 2025. Various steps will need to be completed such as Examination and various consultations. The Council will also need to find sites to meet the housing delivery test and make adjustments resulting from new household projections due to be published in 2023. The Inspector also said that “appropriate and proportionate area/site assessments [and] viability testing would need to be done in an impartial manner”. Can you sketch out the broad activities and timelines required to meet the April 2025 deadline?

The answer is shown in the video below.

We think the Council has got its head in the sand, because the National Planning Policy Guidance is fairly clear that Local Plans need to be reviewed every five years. If there is any ambiguity, surely it would be prudent to plan for the worst case scenario. We are reminded of the aphorism, failure to plan is to plan to fail. 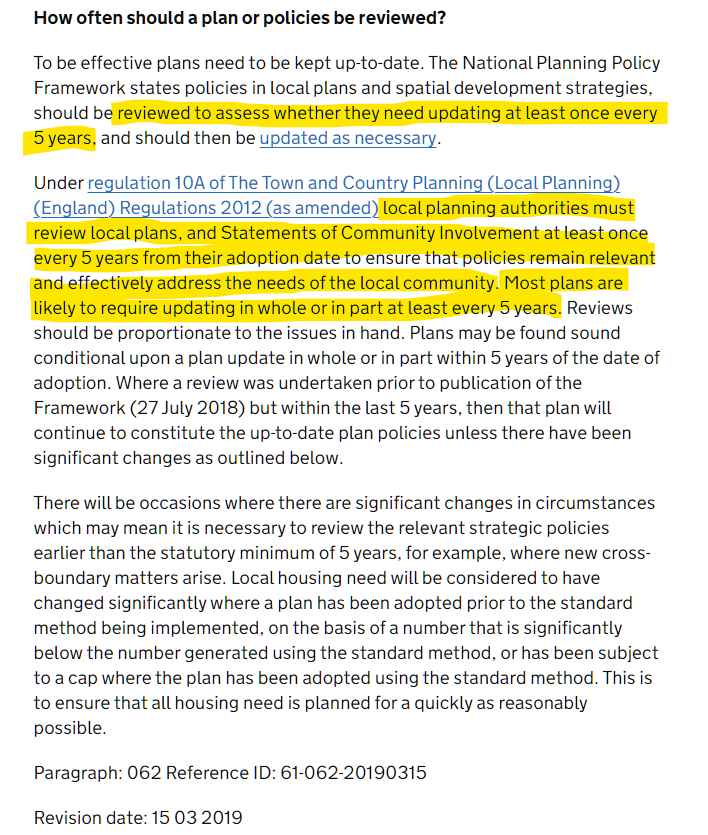 At the September Council meeting we were promised that the Shapley Heath survey results were going to be published “in full” (subject to GDPR check) “shortly”. Most reasonable people would have expected “shortly” to mean within a couple of weeks. They are still being kept secret, with a vague commitment to publish sometime in the New Year. Can you give a precise deadline for when these important results will be made available to the taxpayers of Hart who paid for the survey?

The answer is shown in the video below:

We can now expect the survey to be published on 13 December. However, they leave the door open to later publication if they have not received other surveys. However, there are no other surveys, just baseline studies many of which have been completed for some time.

Back in September we were promised a “a business case for the cost benefit analysis of starting to commence the preparation for the next local plan review”. Subsequent papers have been notable because they contained no costs and no benefits of stopping Shapley Heath and changing course. Are we to assume that all of the FY21/22 budget for Shapley Heath has been spent already, despite the project being terminated early, and so no savings will be made, or is this just another example of weak financial controls?

The answer is shown in the video below.

It seems that Councillor Radley thinks our question is disingenuous, because there are no examples of weak financial controls.  First, he says that the full year outturn is going to be £135K against a budget (after the £130K Government grant) of £149K. It seems odd that they have spent most of the budget in just over half the year. Even odder that they are continuing to spend money on a project that’s been stopped.

There are many other examples of weak financial controls. First, they spent £90K against a £50k budget for New Settlement in FY18/19 and £283K against a zero budget in FY20/21. Second, they lost over £1m in relation to the Waste Contract and finally, even the S151 officer said that they needed to “make sure that our financial controls are fully, fully embedded” in the organisation.  Why do they need to do that if the controls are already solid?

As you know, Hart is facing a significant structural budget deficit for the foreseeable future. The Level 1 and Level 2 savings identified so far do not fill the financial black hole. Nearby East Hampshire and Havant councils get along fine with just one CEO and senior management team shared between them. Yet Hart, one of the smallest local authorities in the country, has two CEOs. What actions are you taking to ensure this shameful waste of taxpayers’ money does not continue?

The answer is shown in the video below:

At least the Councillor Neighbour has moved on from insisting the budget is balanced. But he seems to have his head in the sand about the costs of Hart’s senior leadership. We covered leadership costs here, where we showed that Hart’s leadership team cost over £540K per annum, whereas the combined team for Havant and East Hampshire is £333K. His comparison of staff paid over £50K is likely distorted by different levels of outsourcing.

We could not leave out the scene of Councillor Sara Kinnell flouncing out of the meeting after fielding a fairly innocuous question about dog wardens.

This isn’t the first time we have seen dramatic behaviour from Councillor Kinnell. If she can’t cope with fairly innocuous questions, then it might be better for her health if she reconsiders her position as a Cabinet member.