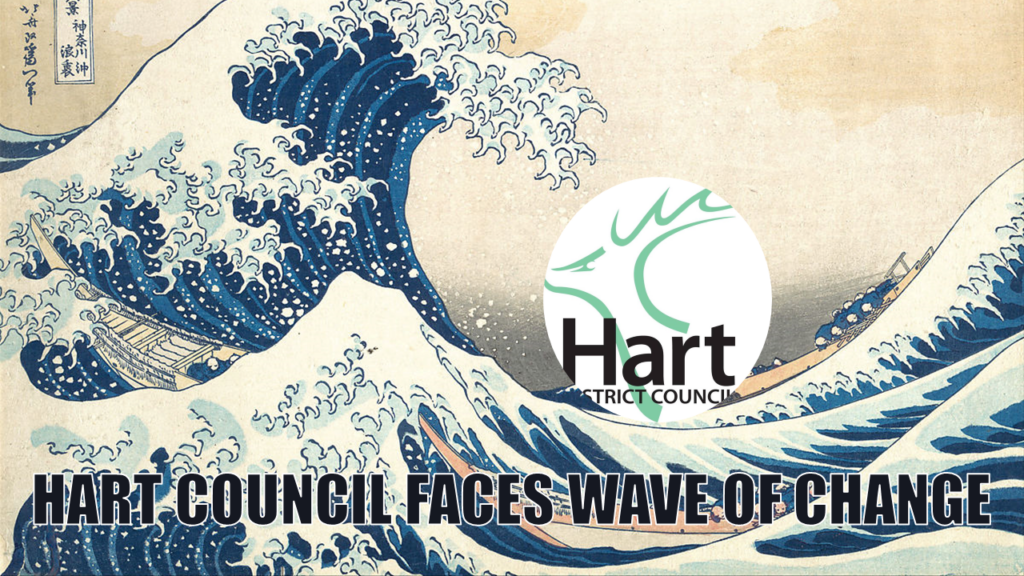 After seeing the many recent failures of Hart Council, it is inevitable that Hart will face a wave of change. The most pressing issue facing the council is the structural budget deficit. Even after the savings they have identified, a large deficit remains. This is clearly unsustainable for even a few years, so something radical needs to change, and quickly. The only question is, will Hart take the initiative and surf the wave of change. Or will it be overtaken by events and be destroyed by a tsunami beyond its control?

There are some potential ideas to consider:

By way of example, nearby Havant and East Hampshire councils have come to an arrangement to share resources. This has enabled them to make significant savings in for instance, the leadership team.

Hart currently has 2 full-time chief executives each costing over £122K per year in salaries, expenses and pension contributions. In addition, there is a full time S151/Head of Corporate Services Officer, a Head of Place, Head of Environmental and Technical Services and a Head of Community Services. Each of those roles costs nearly £100K on a full year basis. In total, the leadership team costs over £540K per year. 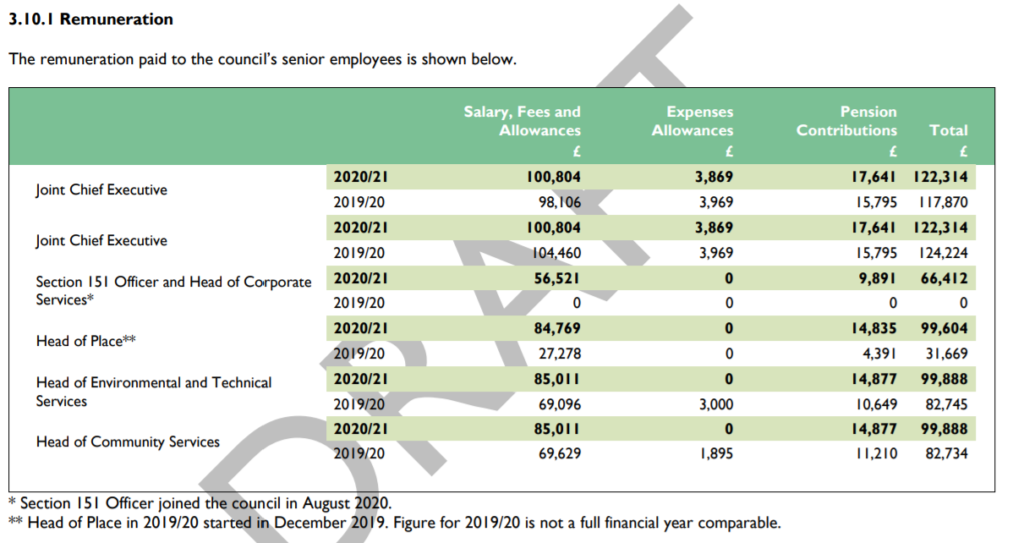 Between them, Havant and East Hampshire have a single chief executive, a director of Corporate Services/S151 and a Service Director of Regeneration and Place. In total the cost of the leadership team is £333K. This is shared between the two councils giving a cost for each of £166K. 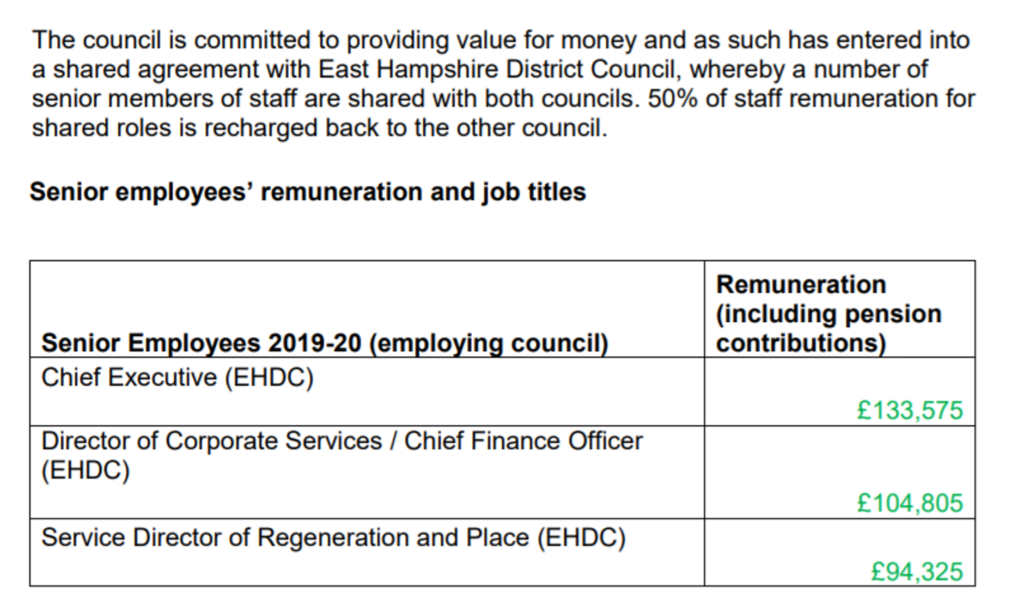 It is simply untenable for Hart to have two chief executives when Havant and East Hampshire get along with just one between them. On leadership team alone there is a potential saving of £378K per year if an agreement could be reached with another council. Probably more once additional ancillary costs are taken into account. No doubt additional savings could be made in the lower ranks too from combining the workforces. Additional savings could likely be made in contracts, premises and IT systems too. It is probably feasible to eliminate the remaining deficits in 22/23 (£494K) and 23/24 (£703K) from such a combination.

Interestingly, both councils are forecasting surpluses in the medium term, even though they are both of similar size to Hart.

Having established that sharing resources between councils can work and deliver savings, it is time to look for potential candidates.

Perhaps the most obvious candidate would be neighbouring Rushmoor. However, their finances are an even bigger basket case than Hart’s. Rushmoor is forecasting a deficit of over £4m in FY23/24 and FY24/25. Moreover, they are also forecasting that their reserves will be totally depleted in FY23/24. 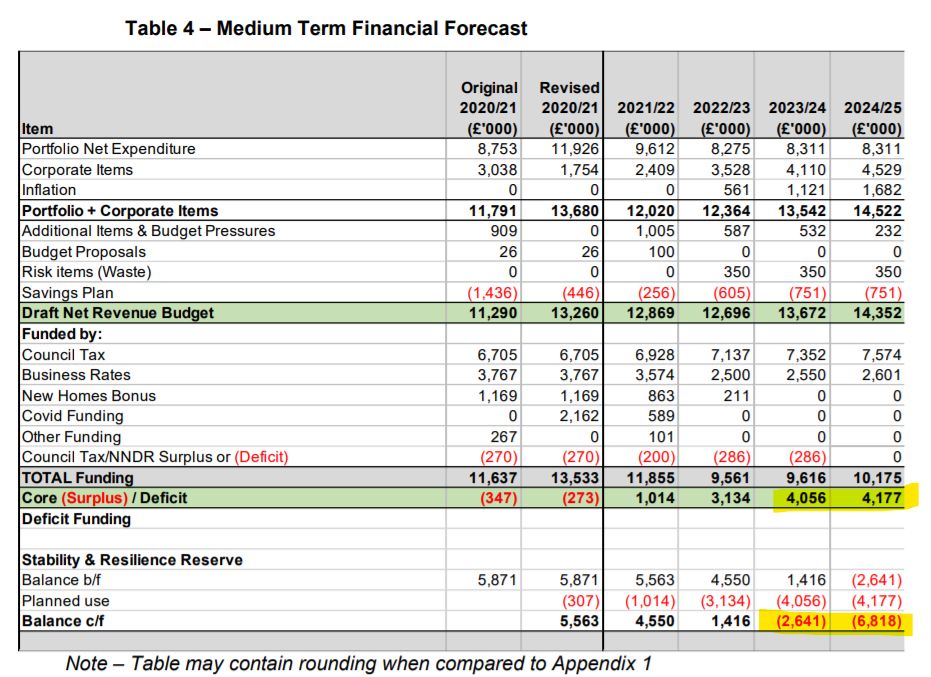 The other potential candidate is Basingstoke and Deane (B&D). B&D is about three times bigger than Hart, with an annual budget of around £32m. It is currently running a surplus, but is forecasting a deficit in FY23/24. Hart already shares the waste contract with B&D. Combining resources with B&D will no doubt lead to savings that could help both councils close the future funding gap. 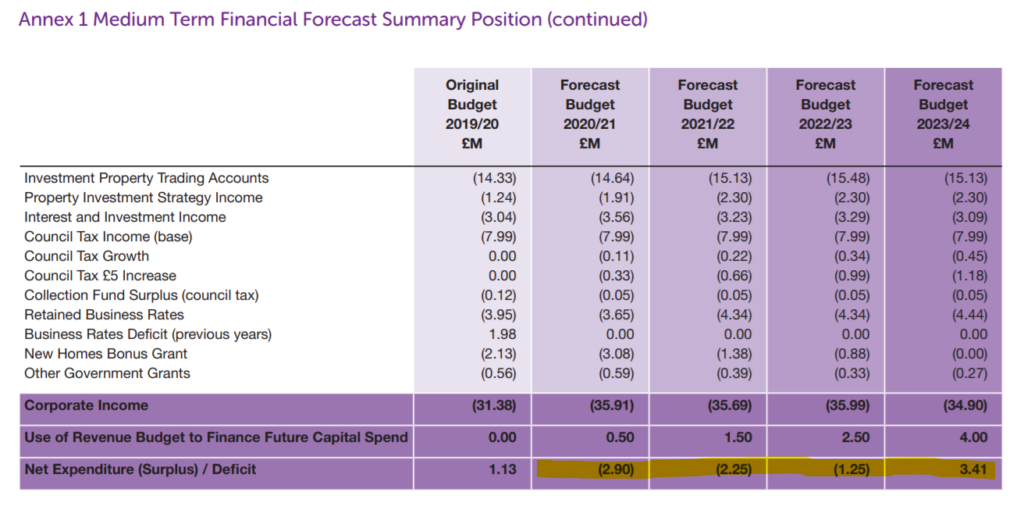 Another development that we need to keep a lose eye on is the proposed “Pan-Hampshire Deal”. Hampshire County Council have produced a couple of documents about the proposals:

The idea is to seek a devolution deal from the Government covering the existing Hampshire County Council (HCC) area, plus the unitary authorities of Southampton, Portsmouth and the Isle of Wight. The idea is to seek more powers and responsibilities from Central Government along with extra funding.

This may well have a significant impact on the governance of the whole of Hampshire.  Two options are proposed:

Clearly, the second option to create a pan-Hampshire combined authority may well impact the structure of the existing authorities. There are almost certainly opportunities for significant cost savings. However, our fear is that such a move may create a local government leviathan that is too remote and unresponsive to the needs of a small district like Hart.

HCC are inviting views from partners and stakeholders. So we will have to see what transpires. But it may be that Hart gets subsumed into this bigger plan.