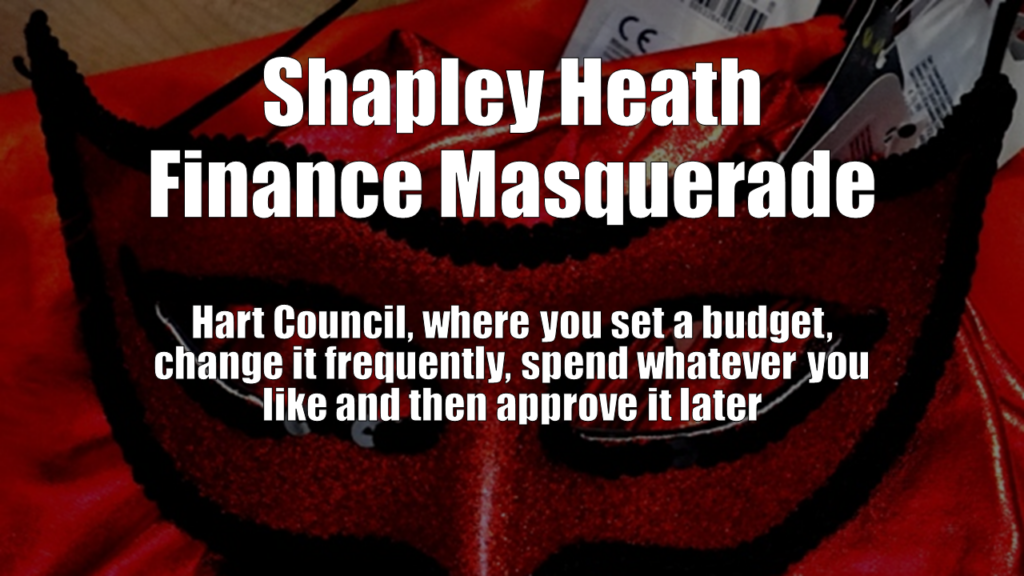 Closer examination of the evolution of the Shapley Heath budget and spending has revealed disturbing weaknesses in budgeting and financial control. This comes in addition to the errors in reporting the FY21/22 overall budget and the smoke and mirrors surrounding the reporting of the FY20/21 budget and variances.

In summary, for Shapley Heath in FY20/21, they set a budget of £167K and then increased it to £500K. Then they cut it between July and September. Spending year-to-date somehow declined between July and September. Then finally, the budget was cut to zero. They eventually spent £186K for the full year, but had to transfer £283K to reserves to fund the spending. Why the £97K discrepancy, perhaps it is overhead allocations yet to be recharged?

In case you are wondering if this is just a one-off issue because of the special circumstances of Covid, think again. In FY18/19, they set a zero budget, then in November 2018 approved a £50K budget. They had overspent this by December and ended up spending £90K for the full year.

This can only be described as lax financial control. It’s just a masquerade where they pretend to set a budget, spend whatever they like and then gain approval after they have spent the money.

Here are the details:

They set an original budget of £167K. This comes after returning £787K to reserves from FY19/20 after the Inspector threw out their plans for a new town. 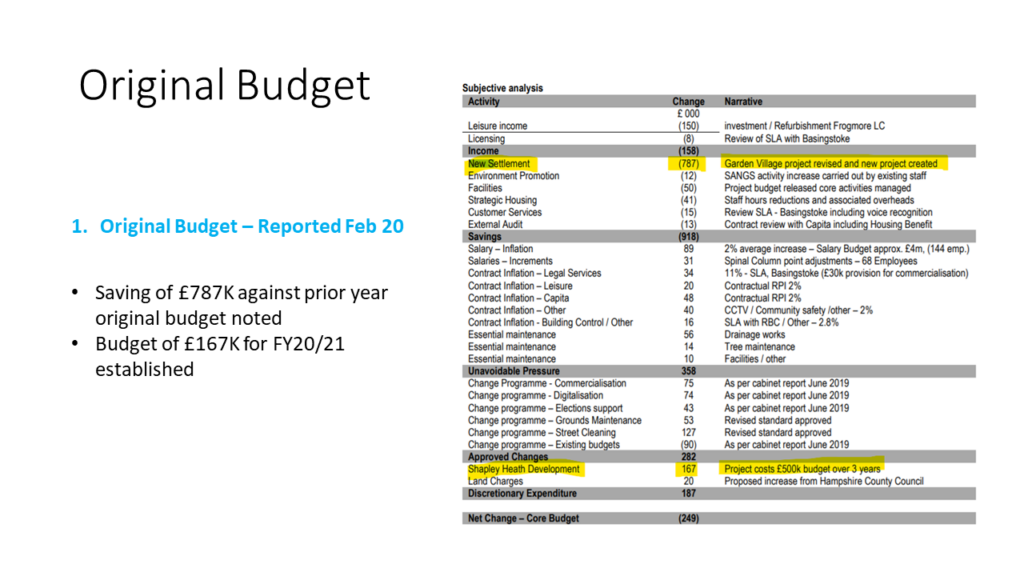 By July 2020, the full year budget had miraculously increased to £500K. Spending had already reached £65.5K. Because the budget had increased, this was recorded as a favourable variance against budget. 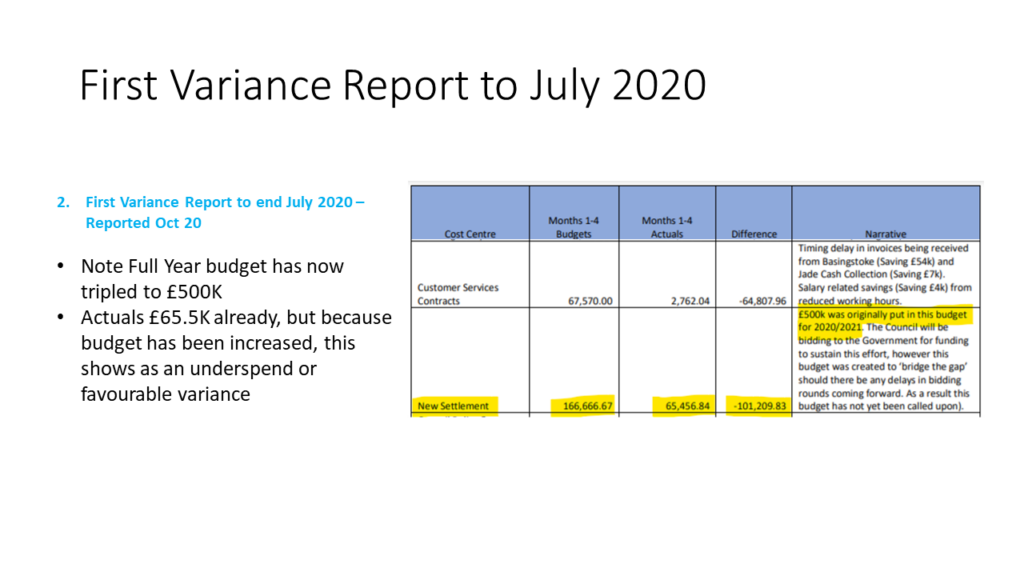 By the end of September, the budget to date had reduced from £167K in July to £34.2K. This perhaps reflects the revised budget agreed in July. However, a revised service-by-service budget wasn’t provided at that time. Miraculously, spending to end September had fallen to £47.7K from the £65.5K spending to end July. This was now recorded as an unfavourable variance. The unfavourable variance reflected unplanned spending of £13K on a Covid survey. Quite what this has to do with a potential new development several years down the line is anyone’s guess. 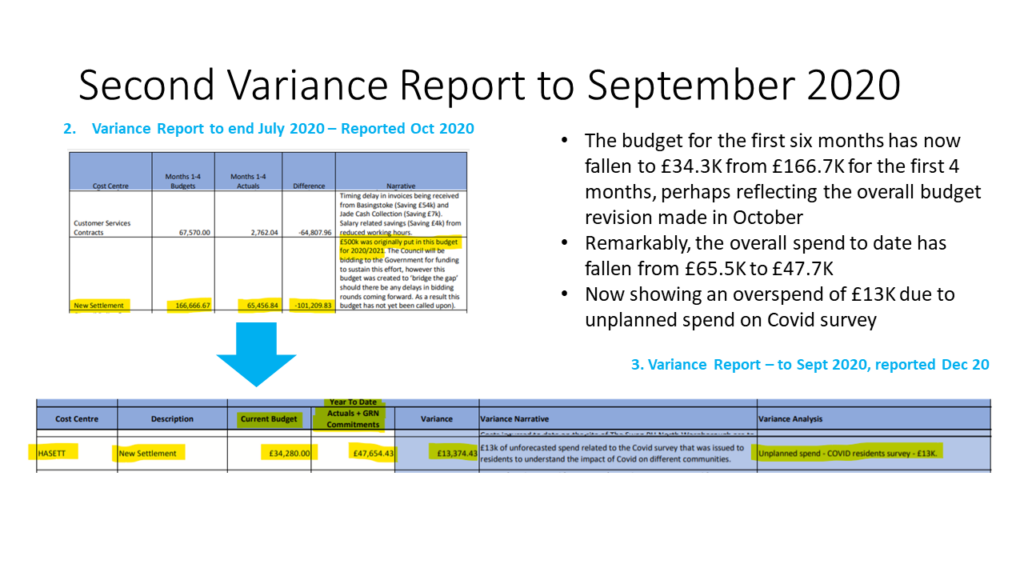 The budget was not reported for the year to December 2020. At this time they only reported variances to budget. By this time, the variance to budget (which one?) had increased to £37K. they had hired two extra people and Chelgate PR. Strangely, the spend on the Covid survey had fallen to £8K. There was also a “variance to forecast” report, but Shapley Heath didn’t appear in it. 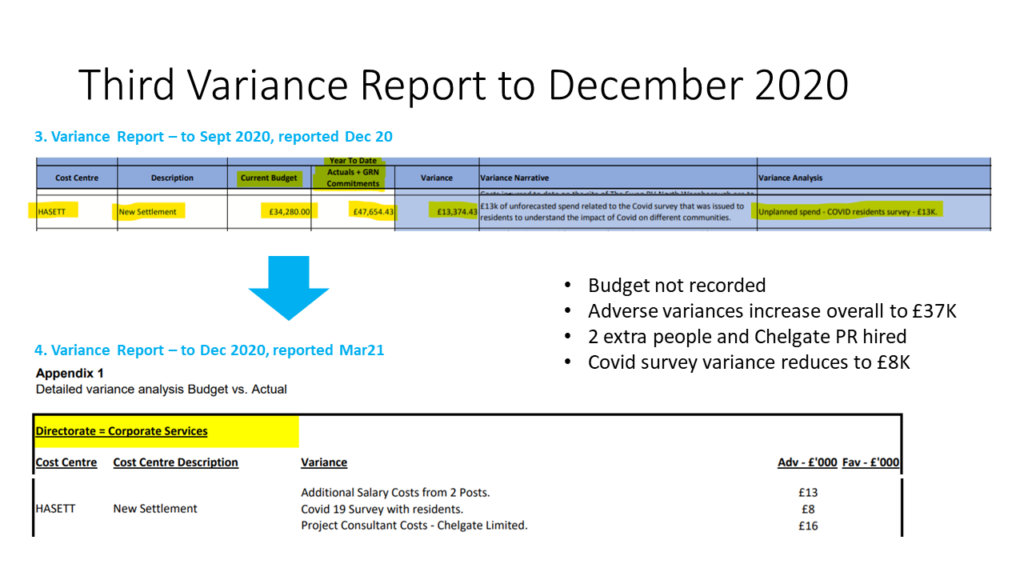 The outturn reporting gets even more odd. The official report presented to Cabinet shows £283K transferred from reserves to fund FY20/21 spending on Shapley Heath. Yet, in an answer to a question to council in late July, spending of £186K was claimed (it maybe the extra costs come from overhead allocation recharges yet to be reported). 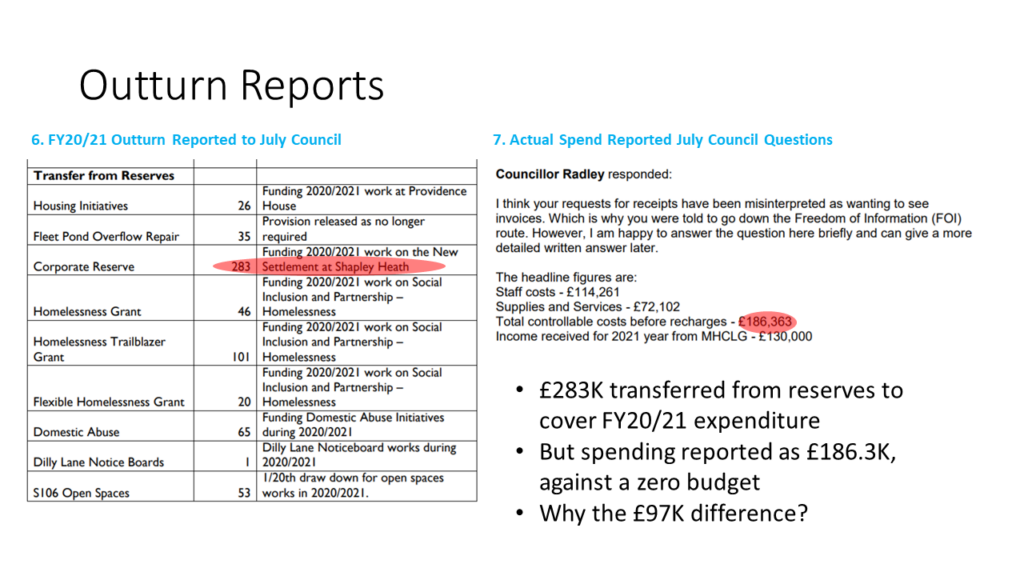 All this spending has been incurred despite the full year budget being reset to zero. It is difficult to describe this as anything other than a complete mess. 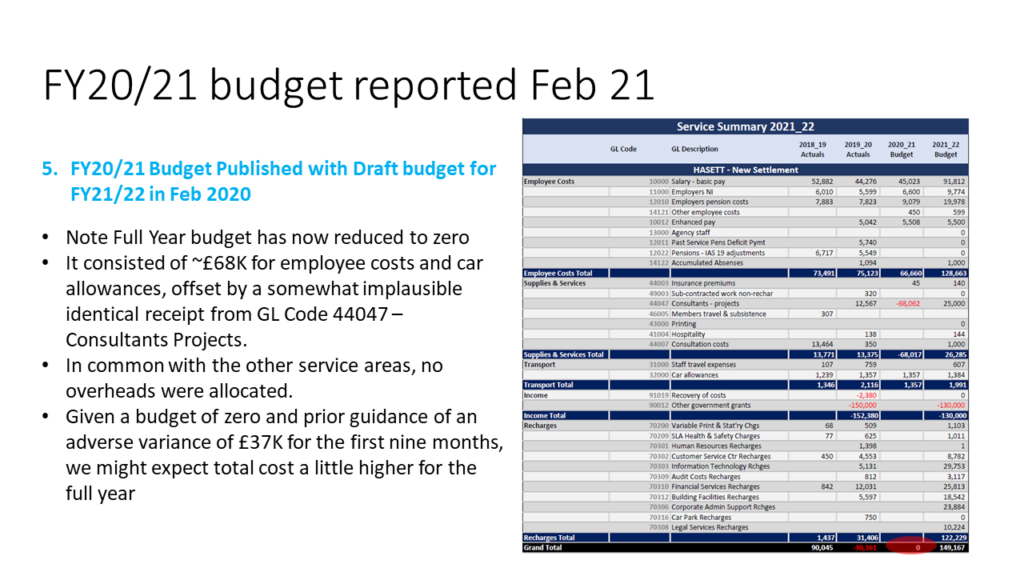 And just in case you thought this was a one-off aberration caused by Covid, FY18/19 was no better. They originally set a zero budget. A £50K budget was approved in November 2018. This was overspent by December, with spending at £51.5K. At the time the December figures were reported in March 2019, it was expected total spending for the year would be £67.4K. The full-year outturn is now recorded as £90K. Nearly double the requested budget. What a shambles. 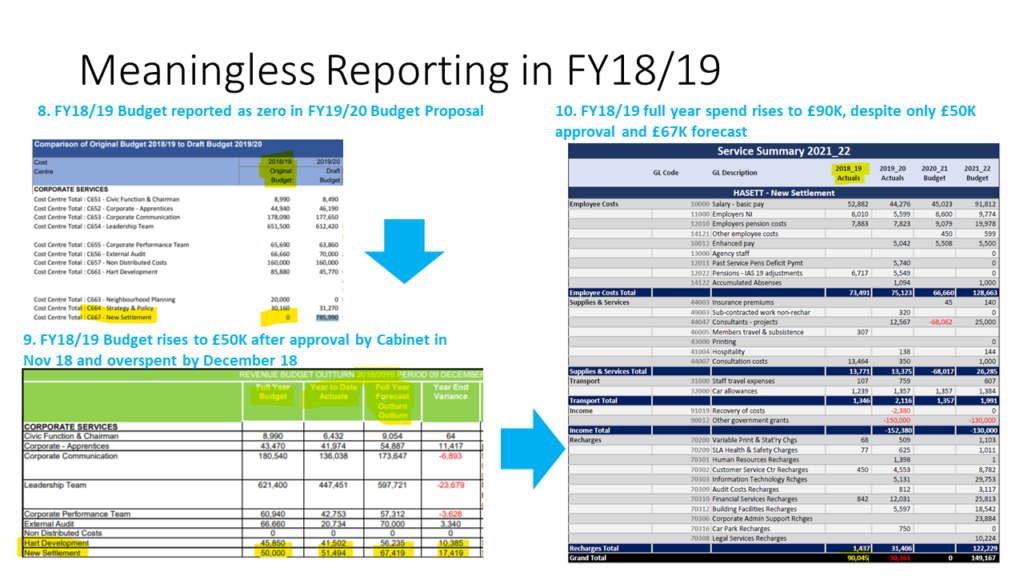