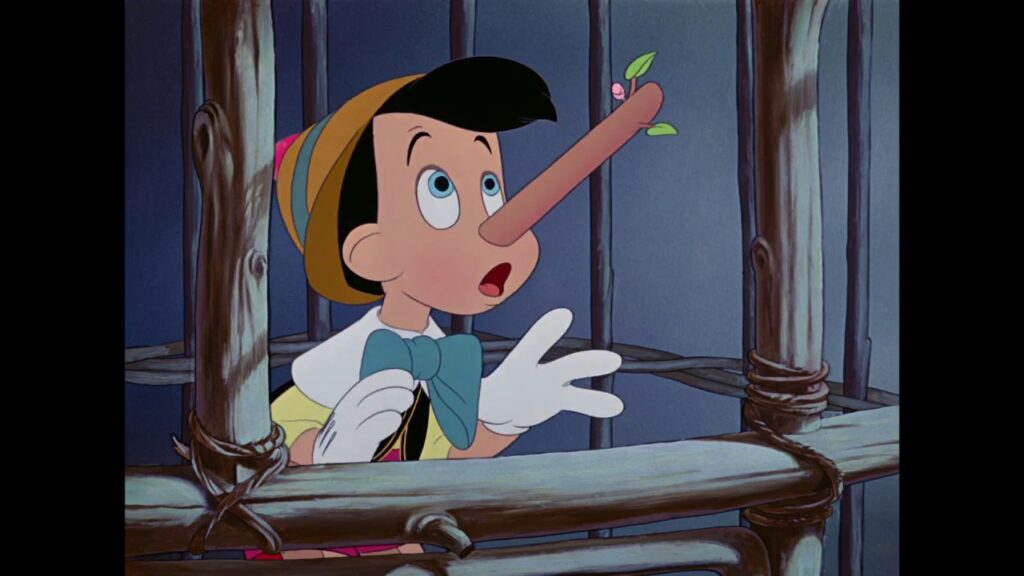 CCH have released their latest newsletter. They follow their usual path of being economical with the truth.  There are some quite astonishing claims in there, that need to be answered.

The Local Plan has already demonstrated its value by being part of the successful defence against inappropriate urban extensions in Hook and most notably at Pale Lane, on farmland adjacent to Elvetham Heath. Even as a draft, it has significant weight when considered at a planning appeal.

But the inspector said that the emerging Local Plan only carried “moderate weight“. CCH don’t mention that the most important piece of evidence was the Hartley Wintney Neighbourhood Plan, whcih carried “significant weight”.

The very calculation the government use to reach our `Objectively Assessed Housing Need’ is expected to be radically modified in the near future. Any material change in this calculation of our housing numbers would render the Local Plan `out of date‘ and require Hart to fundamentally review its Local Plan….

There is some truth in the claim that Hart will run short of housing around 2025/26, as we covered here. But there is no evidence that the new formula for calculating housing need is going to be “radically modified”. Indeed their implication that housing numbers will rise is false.  In fact, if Hart were to conduct an early review of the Local Plan, our annual housing target would be reduced from 423 dpa to 251 dpa. But, in Hart’s answer to our latest question, they have ruled out an early review.

CCH then go on to justify the need for Shapley Heath:

That is why the Community Campaign support the approach of carefully evaluating the possibility of a new eco-friendly garden village within walking distance of Winchfield station. Only if needed, this development could be used to deliver the bulk of any additional housing that may be required by central government in the period from 2026 onwards. As such, it must be very carefully planned to deliver all the necessary infrastructure.

Note how Shapley Heath has now become “eco-friendly”, despite the fact it is entirely unnecessary and building it will likely emit 1m tonnes of CO2.

A new settlement is not needed as part of the new Local Plan. This is all about funding (with government grant support) a project to see what is possible. If the future government housing targets do not require such housing to be built – it will not be built. This is an insurance policy against Hart having to take on a higher housing quota in a few years’ time.

If they really wanted an insurance policy they would be conducting a immediate review of the Local Plan to take advantage of the lower housing target from the latest Government methodology.

Then on the size of Shapley Heath.  They claim that they are only considering a development of 5,000 houses. But the bid they submitted to Government was for up to 10,000. The flawed viability assessment was for 5,300 houses. 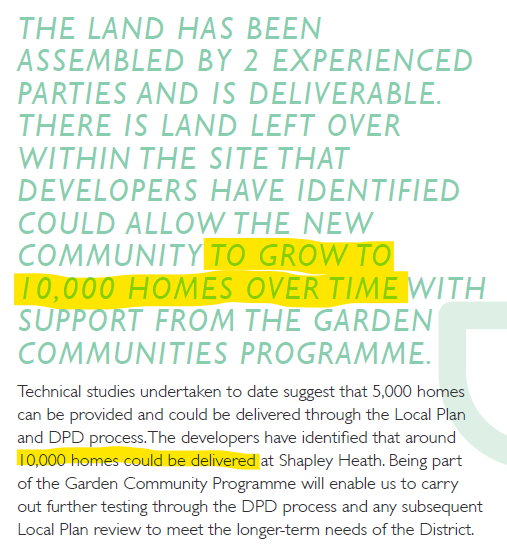 So, they are wrong again. They then go on to make some false claims about infrastructure.

The flawed viability assessment for Shapley Heath pointedly does not include provision for healthcare.

Their plans simply do not stack up to even cursory scrutiny. They go on to make extraordinary claims about the features of Shapley Heath.

Shapley Heath’ is being investigated using government grant funding designed to promote eco-friendly garden villages. This is about learning from the disasters of the past and building semi-rural communities which are sympathetic to and supportive of, the local and wider ecology and climate. There will be integrated transport, rainwater harvesting, centralised heat and power plants, carbon efficient housing design, an emphasis on renewables and truly sustainable living.

Let’s for a moment ignore the fact that this isn’t needed, so the 1m tonnes of CO2 produced during construction will also be an unnecessary. But even the Planning Inspector criticised the claims for a district heating system.

Option 1b has been ranked the highest under the category climate change. This is as a result of the potential for the proposed new settlement to deliver a district heating system. However, there is little evidence to suggest that this is a feasible or realistic option that is being actively pursued by the site promoters. I consider this raises doubt about the appropriateness of such a ranking.

The viability study only made allowance for standard build costs. No allowance was made for the additional costs of “carbon efficient housing design”. Their claims are simply marketing fluff that aren’t backed up by anything.

The CCH newsletter then goes on to discuss Fleet. They claim that Fleet “isn’t all that bad”. This is despite the council’s own bid for Future High Street funding saying:

Fleet is falling behind its local competitors. Most of the surrounding towns are attracting hundreds of millions of pounds of investment. Fleet isn’t getting anything. 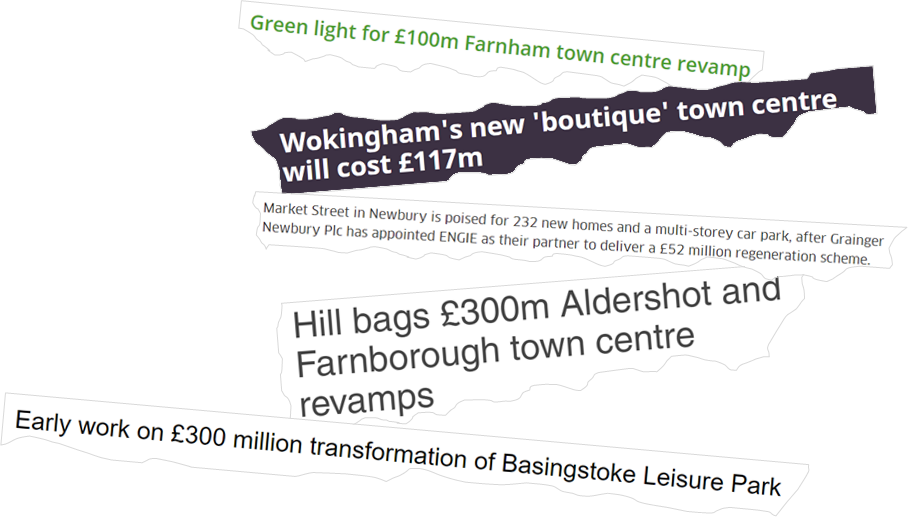 CCH then go onto claim that revitalising our town centres must mean “high-rise” flats. Nothing could be further from the truth. Indeed high-rise developments do not deliver good places to live, and we oppose them. They offer no vision on how to address the issues facing Fleet. We will give further details on our ideas in further posts.

In the meantime, please do challenge CCH to come clean on their mendacious claims.