We have finally pulled together our submission to the Regulation 19 Hart Local Plan consultation. This, the first of a series of article explains some of the reasons why Policy SS3 to build a new town should be removed.

The process for making a submission is as follows:
Submissions have to be made before 4pm on 26 March 2018. If you are keen to get your submission completed, you can use the summary guide we have pulled together, or for the more adventurous, you can use our full submission. Please edit the text into your own words.

Why should Policy SS3 for a new town be removed from the Hart Local Plan?

The most egregious part of the draft Local Plan is the proposal to include an unnecessary new town. This should be removed for the following reasons:

The new town is not required 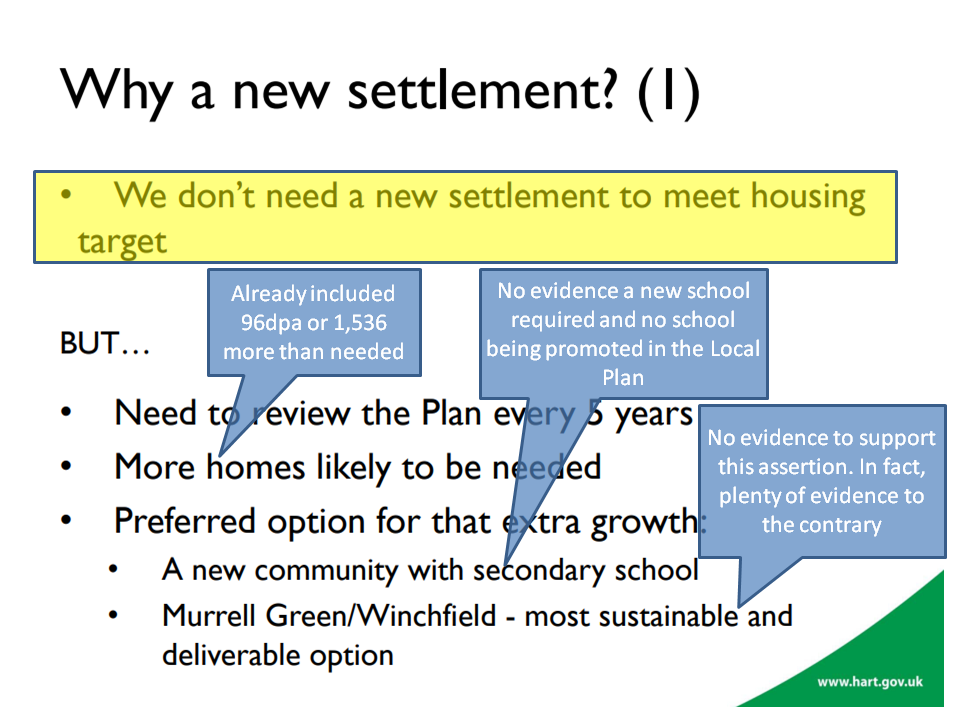 Not only that, the council themselves admit that the housing supply is under-estimated. 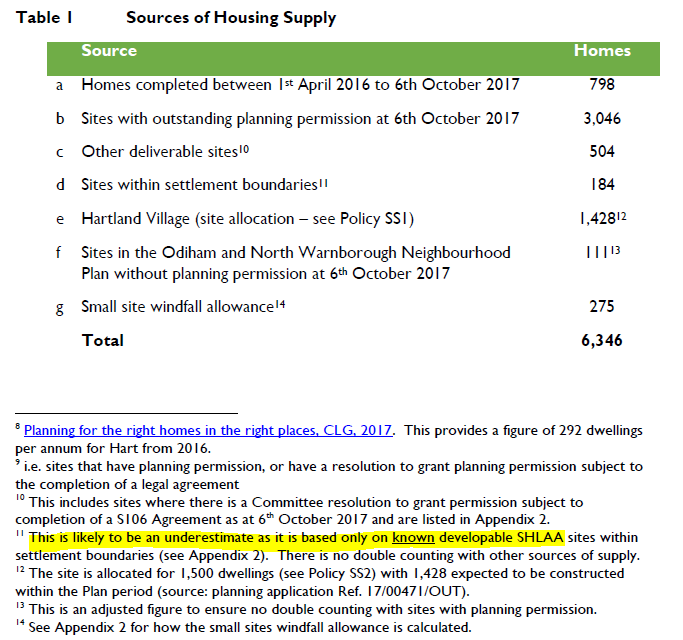 And even this under-estimate does not include housing supply identified in the Winchfield and Hartley Wintney Neighbourhood plans.

The combination of the over-inflated housing demand numbers and the under-stated housing supply numbers mean that the new town simply is not required.

The new town proposal is unsustainable

The area of search identified in the Local Plan contains a very wide area, consisting of the areas known as Murrell Green and Winchfield. 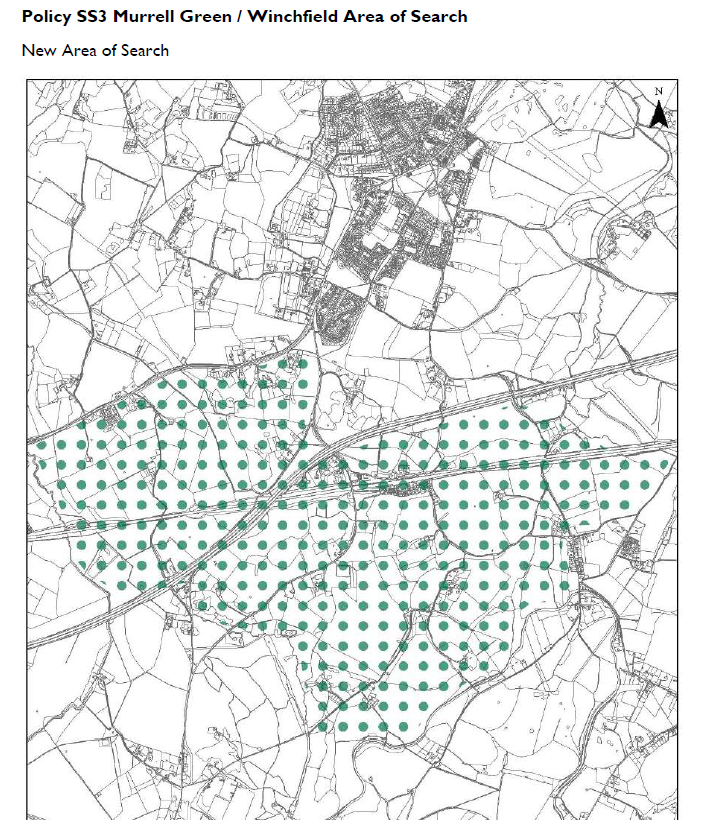 We don’t need Hartley Winchook new town so why is it in the Local Plan?

The attempts at sustainability appraisals of the Murrell Green and Winchfield sites have been poor, but nevertheless have demonstrated some very significant weaknesses that cannot be overcome. 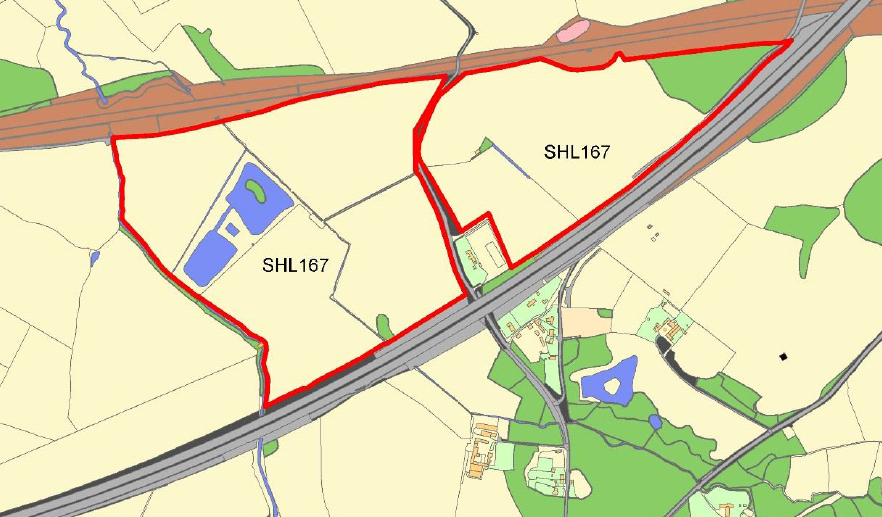 Let’s deal with Murrell Green first. Part of the site, known as Beggars Corner was the subject of a planning application for a Solar Farm. This was refused on the grounds that it would spoil the views from Odiham.  It is difficult to see how a 1,800 unit development would be any less intrusive than a solar farm. Moreover, that planning application identified that part of the Beggars Corner location is former landfill and some of it has unknown contents. This does not appear to be a suitable location on which to build new houses, or indeed form part of a SANG.

The sustainability appraisal conveniently did not cover this part of the proposed Murrell Green development.

Moreover, the SA did not manage to discover that there is a Major Accident Hazard Pipeline crossing the site.  Not only that, the developer’s proposal included a secondary school sited right on top of the pipeline. After examination of the HSE rules regarding such installations, I conclude that neither houses nor schools will be able to be built within up to 100m of that pipeline. I also understand that roads should not cross such pipelines either. See analysis here. 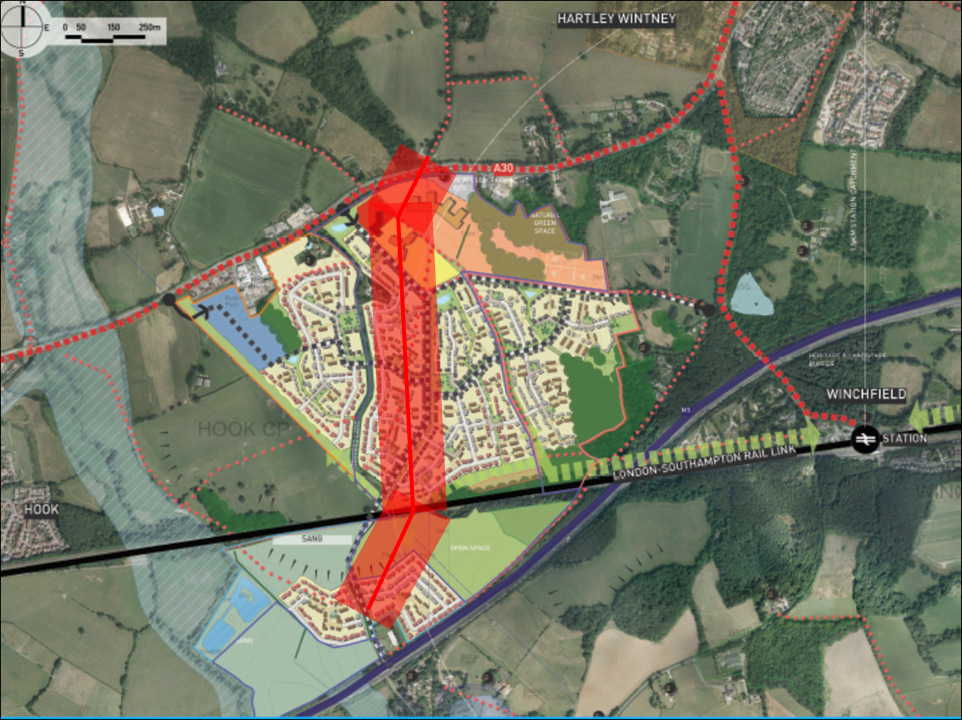 When one adds in other constraints such as SINCs, proximity of a high voltage power line, the railway and the M3, it appears as though the Murrell Green part of the area of search is not suitable for large scale development.

Turning to the Winchfield part of the area of search, it should be noted that the Winchfield sustainability assessment had to be extracted from HDC by FOI request. It can be found here.

The first point to note is that much of land in the Winchfield area of search is not in fact for sale. This comprises the central swathe known as Talbothay’s Farm plus other areas. Immediately, this leads to the conclusion that it won’t be possible to plan for a coherent settlement if the central part is not available.

In addition, the main areas considered to be constraints in the SA report were:

More detail on this can be found here. Other spurious claims were made in the SA, such as the claim that building a “renewable and low-carbon energy generation and transfer” plant will diversify energy supply. What they mean is building a wood-burning power station utilising locally sourced timber (p74). Such a plant would be extremely undesirable since burning wood produces more CO2 than burning coal, and none of the proposed master plans include such space for such a plant. Plus, of course, I don’t think many people would support chopping down Bramshill forest to fuel such a plant. This claim was used to indicate that Winchfield was somehow more sustainable than other potential locations.

They also claim that building 3,000 new houses, with associated traffic will somehow “reduce the
emissions of greenhouse gases and manage the impacts of climate change”. Again, complete and utter nonsense.

They also say there was some evidence of wet ground at the far east of SHL183, but “no other obvious evidence of current or past flooding”.

This is of course complete nonsense. The detailed assessment also says there’s only a one in 30 year chance of surface water flooding. The area of Taplins Farm Lane near the railway bridge flooded three times in 2016 alone. Evidence documenting the flood events can be found here (4 Jan) , here (7 Jan), here (9 March on Station Road) and here (28 March due to #StormKatie). I also understand that a similar area has flooded again in January 2018. These are obviously more than one in 30 year events.

The area east of Winchfield fared less well than Murrell Green in the sustainability assessment even with the grossly understated the flood risk. And of course there were other issues with Historic Environment, Bio-diversity, Landscape and Water Quality. It is difficult to see how this could deliver a significant number of houses.

The area west of Winchfield was ruled out of the sustainability assessment, because it is a more peripheral location relative to the train station, does not offer a central focus and is in close proximity to Odiham SSSI. It therefore offers little prospect of significant housing development.

It is clear that there are very considerable constraints even before considering the infrastructure problems.

Hart has not put together proper estimates of the costs of infrastructure; despite saying it would do so. 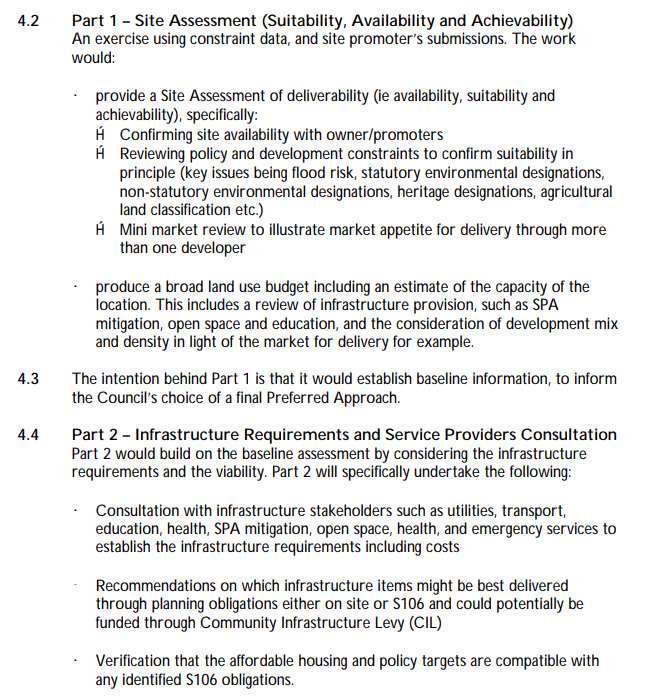 If this is a 5,000 dwelling new town, with 40% ‘affordable’, the remaining market houses might be expected to generate £15-20K per unit of S106/CIL. This would amount to around £45-60m. This is well short of the funding requirement and therefore might be expected to make the existing infrastructure funding gap worse.

Taken together, it is difficult to see how such a new town could be either sustainable or viable. Indeed, it is notable that in the three years of this saga, with many Hart Council members being supportive and apparently developers becoming anxious, no planning application has been made. Perhaps that’s because the developers also realise this is a pipedream.

Secondary school unnecessary and not in a suitable location

Back in 2015, Hampshire’s forecast went as far as 2018 and they were predicting a surplus of places up to 2018. They also forecast a falling birth rate and a significant number of existing pupils attending Hart schools from outside the district.

In 2017, HCC published a new school place plan that showed an overall surplus of places in both secondary and primary schools up to 2021.

A recent letter from a Hampshire Councillor shows that 98% of Hampshire secondary pupils have been allocated a place at a school of their choice for the next academic year. 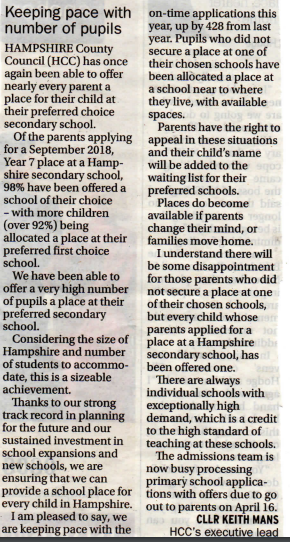 So, having established that a new school is probably not required, we must now address the proposals that have been put forward over the past three years for the sites of new secondary schools.

First, we had Barratts in 2014 putting up a proposal to place a new school right next door to an institution housing sex offenders. 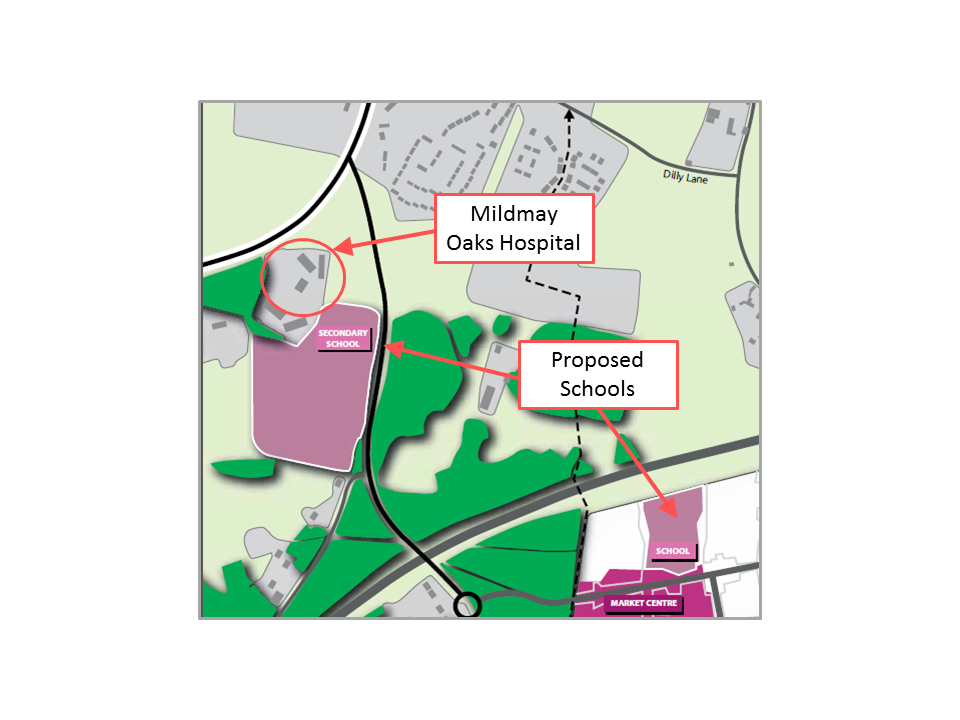 Then we had the proposal, described above to build a secondary school right on top of the high-pressure gas main running through the Murrell Green site.

More recently we have had another proposal from promoters of Winchfield which placed the secondary school directly under the high-voltage power lines. 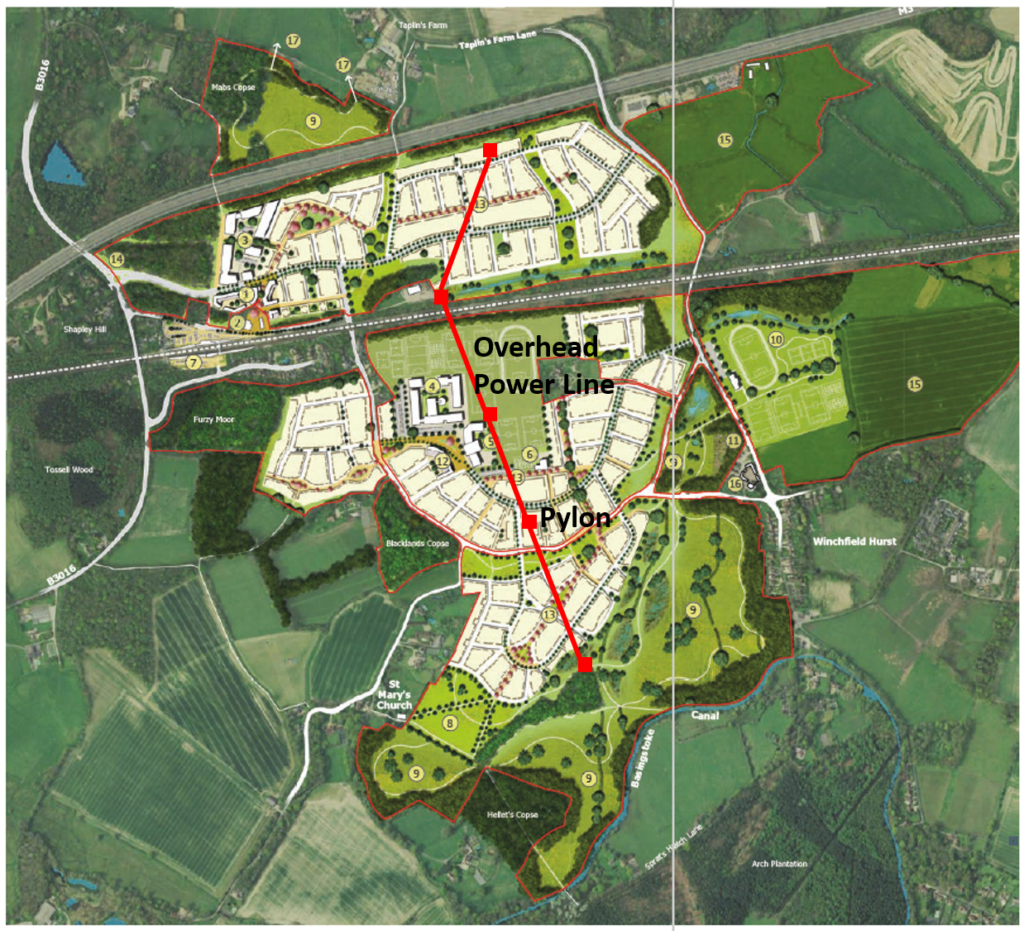 If after three years of trying, they cannot find a suitable location for a secondary school, one does have to come to the conclusion that they never will.

In conclusion, it is apparent that we don’t need a secondary school, and none of the developers involved have managed to find a suitable location.

In other areas of the Local Plan, the council have been quite assiduous in defining strategic gaps. They have produced no such gaps around the new area of search, nor to the east of Hook or anywhere around Hartley Wintney. Nor are any gaps proposed to the north west of Fleet. 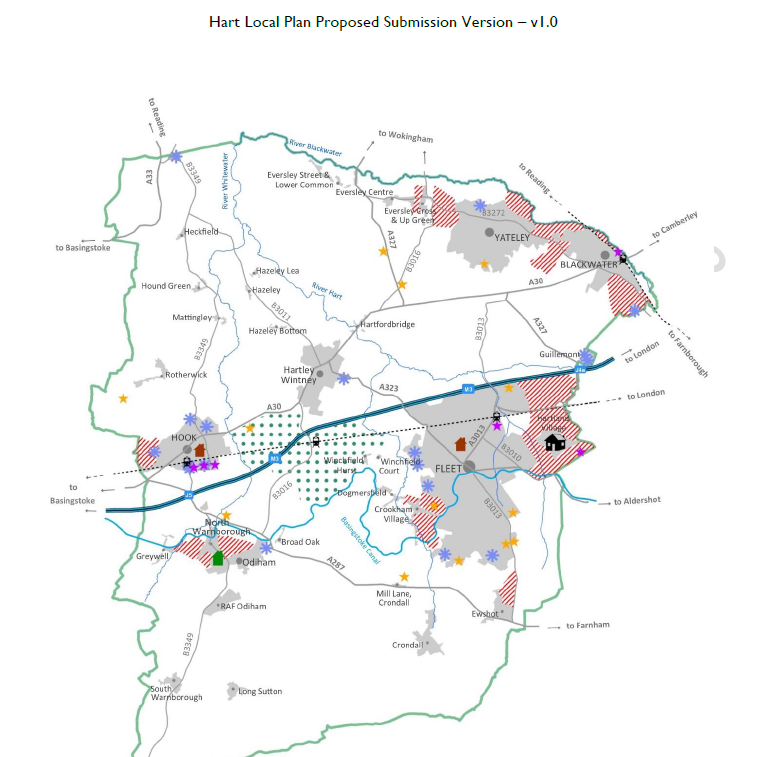 If they are allowed to go ahead with this area of search, unconstrained by strategic gaps, there is a strong risk that they will come up with proposals that lead to coalescence of our proud villages.

Breaks the Objectives elsewhere in the Hart Local Plan

Elsewhere in the Local Plan, Hart have come up with a number of objectives. These are reproduced below with my comments in bold on how these proposals break those objectives.

Remedy:  I would propose that Policy SS3 is removed entirely from the Hart Local Plan, and consequent amendments are made to SS1.