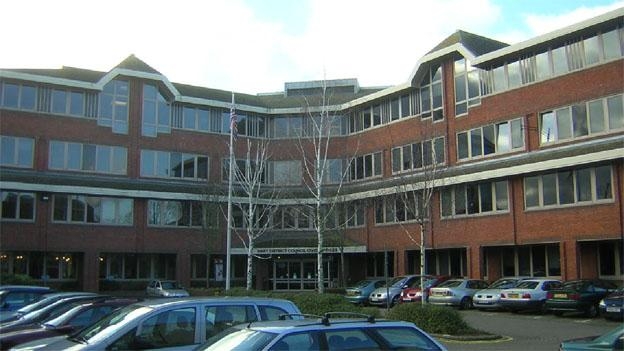 Hart Council has been thrown into some disarray after Conservative Councillors Sara Kinnell and Richard Woods have defected to Concrete Community Campaign Hart (CCH). These changes to the balance of power on the Council have not been formally announced by either the council or the parties. However, they are clearly shown on the council website.

On Tuesday 29 November we received confirmation that Cllr Sara Kinnell and Cllr Richard Woods had changed political party both from Conservative to Community Campaign Hart (CCH).

There have been no changes in the Leadership of the Council or the Cabinet Members and the allocation of major committees remain unchanged. 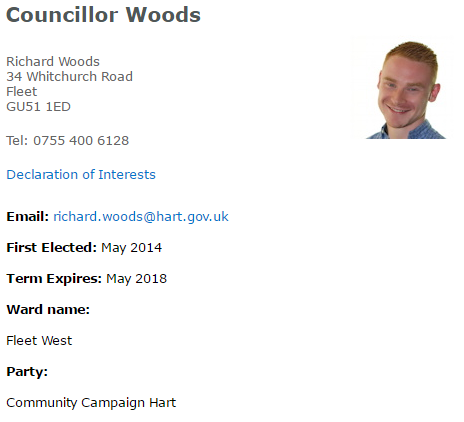 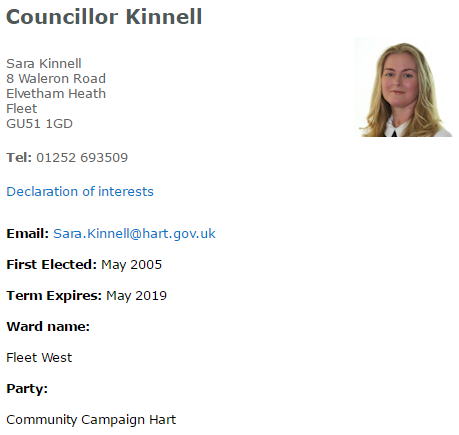 It is not clear why CCH have not announced this coup on their own website. It is also not clear why these councillors have not done the honourable thing and resigned their seats and fought by-elections to reaffirm the support of their constituents.

Prior to the defections, the Tories held 16 of the 33 seats and relied upon independent councillor Rob Leeson for a majority. Now they only hold 14 seats which makes them the largest party but still two short of an absolute majority even if they can continue to rely upon the support of Councillor Leeson.

It is unclear why the councillors have made this move. However, at the council meeting of 27 October both councillors voted for the CCH amendment to mandate a new settlement in Hart even though the other Tories (and some Liberal Democrats) voted down that amendment.

Their move is strange for a number of reasons. First, even though the CCH amendment failed, the current position does not preclude a new settlement. Secondly, We Heart Hart understands that the proposed Winchfield New Town has failed testing, so regardless of the opinions of Councillors Kinnell and Woods, this new town won’t go ahead because it is not viable.

It is not clear what the impact of this move will be on the composition of the Planning Committee. We Heart Hart understands that the composition of this committee should be proportional to the number of seats each party holds on the council. Councillor Woods sat on the committee as a Conservative, but is now CCH.  So, the Tories lose one and CCH gain one seat on the committee, giving each party the same number of seats on the committee, even though CCH have four fewer seats on the council. It would be ironic indeed if Councillor Woods was ejected from the Committee to be replaced by a councillor opposed to the Hartley Winchook New Town. Indeed it would be even more ironic if he was unable to vote on the upcoming planning application about Grove Farm (Netherhouse Copse). 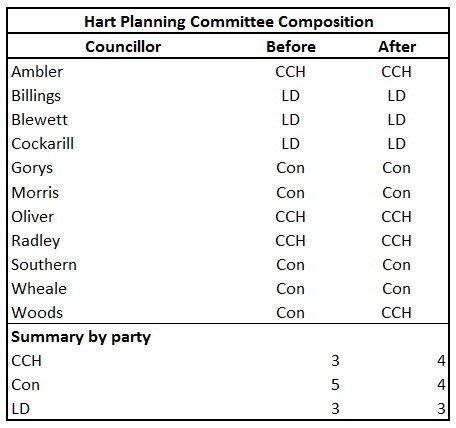 It is clear there is huge amount of wrangling going on over the spatial strategy that is due to be unveiled on 13 December. It seems the Tories will be reliant upon some of the Liberal Democrats to carry through their preferred proposals.