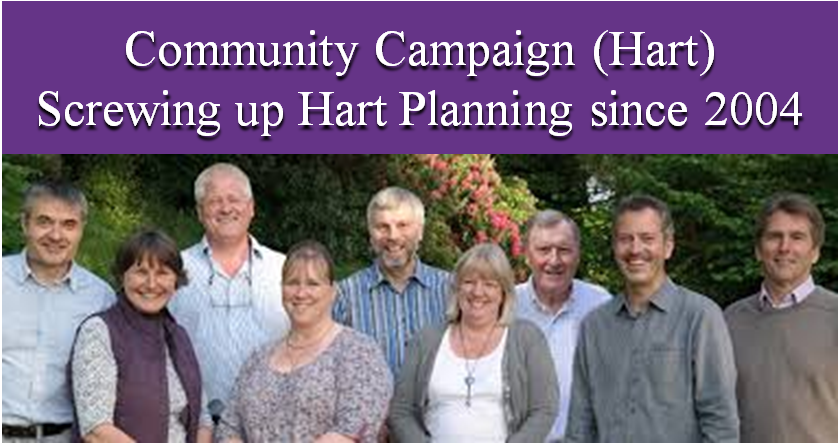 First, the Hart Local Plan. Councillors were warned at their meeting last night that a delay to the Local Plan could cost Hart £2.4m in lost New Homes bonus in 2018/19. Of course it was Community Campaign Hart that forced a delay upon us at the LPSG meeting on Tuesday evening. However, there will be a meeting between the council leader and joint-CEOs on Monday 19 December to decide a way forward.

Now on to the Grove Farm/Netherhouse Copse planning application. This application was due to be determined at the planning meeting on Wednesday 14 December. The planning officers had recommended that planning permission be granted. CCH had intended to refuse the application, but did not follow the correct procedure. They voted instead on a motion to simply delay the determination of the application for further transport studies.

The effect of this is now that the application is ‘not determined’. The developers could appeal the application on grounds on non-determination in the required time. There is a strong likelihood that Hart would lose this appeal.

Even if they manage to fudge this problem and issue a notice of refusal, it is still highly likely the developers will appeal the decision anyway because the officers recommended approval. Realistically, it is likely Hart would lose the appeal.

The costs of running an appeal are approximately £200K. However, there is a real risk that the Inspector would also grant costs to the developers of a further £200K.

But the costs don’t stop there. New rules mean that if houses end up getting approved on appeal, then the council in question loses the New Homes Bonus on those houses. Councils typically receive around £4,000 per dwelling over a period of six years. So loss of the bonus on the 423 houses in the Grove Farm application could end up costing over £1.6m on top of around £400K in appeal costs.

As a final denouement, it was announced that recent defector to CCH, Richard Woods would lose his seat on the Planning Committee and be replaced by Steve Forster. This is to maintain the correct party balance on the Committee.

It is supremely ironic that the councillor who said that he wanted to:

In the words of Mumford and Sons:

‘It was your Hart on the line,