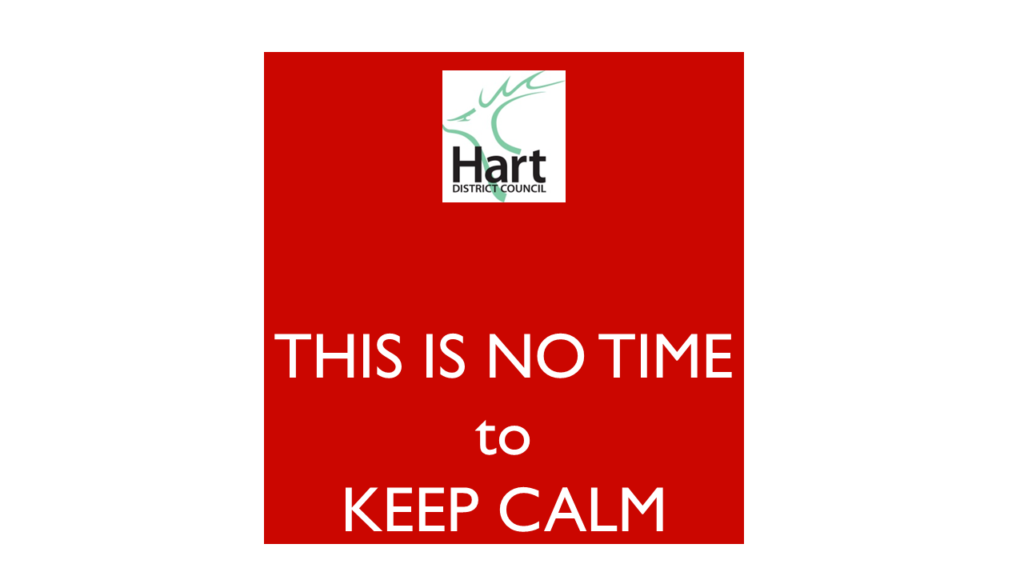 This is no time to keep calm

We Heart Hart has learned that last night’s meeting of the Hart Local Plan Steering Group was a”disaster”.  Concrete Community Campaign Hart (CCH) councillors forced a further delay on to the timetable by insisting that Winchfield New Town is included as an option.

In a further blow, it appears as though Hart’s housing allocation has been further inflated by up to 2,000 additional houses due to new Government guidelines that may force Hart to build even more ‘Affordable Homes’. This new requirement would be in addition to the 40% of homes that must be ‘Affordable’ in the SHMA target.

Apparently, there are no plans to publish the new Strategic Housing Market Assessment (SHMA) until they are ready to publish the Regulation 18 consultation on the new draft Local Plan. We don’t know the timescale for that yet.

This shows that Hart’s statement in October that Hart had to build 1,500 fewer houses was a total sham.

Impact of Delay to the Hart Local Plan

There were three potential options on the table at LPSG for detailed consideration. However, CCH insisted on a fourth option that included the Winchfield New Town. We don’t know the specifics of the other options, but we suspect they included Grove Farm/Netherhouse Copse.

WeHeartHart had been led to believe that the Winchfield New Town option failed testing due to concerns about groundwater flooding and lack of infrastructure. The level of testing that was carried out is now in doubt. It is difficult to see how a further delay and more testing is going to change the viability of the new town.

CCH’s stance is strange because the delay to the Local Plan will weaken Hart’s defences against the speculative applications being submitted by developers. The proposed developments at Grove Farm/Netherhouse Copse and Bramshill House are due to be determined at tonight’s Planning Committee meeting. Of course, an application to develop the Pale Lane site into Elvetham Chase has recently been submitted and this will need to be determined in the New Year. If there is no draft Local Plan, then it will be difficult to defend against it.

It is imperative that we get the Hart Local Plan in place quickly so we can manage the inevitable housing growth that we face. CCH should stop their ideological pursuit of the unviable Winchfield New Town and start to work constructively to solve the problems of the whole district.

We would wish to see many new homes that are truly affordable for Hart residents. However, there is strong evidence of developer land-banking in Hart and of not building enough smaller properties. Simply increasing the housing target won’t lead to a meaningful increase in housing supply. Even the smallest properties at recent developments (for instance Rifle Range Farm/Hartley Row Park at Hartley Wintney) were out of reach of most Hart residents. We think the new additional target for affordable homes should be vigorously challenged.