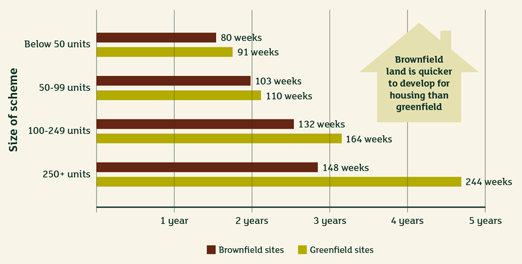 New research from the Campaign to Protect Rural England (CPRE) has shown that brownfield sites are delivered around 6 months faster than green field sites.

The new detailed research report, carried out by construction consultants, Glenigan, covered 15 local authorities across England between March 2012 and December 2015. The data reveals that the time between planning permission being granted and construction work starting is generally the same for brownfield and greenfield sites, but that work on brownfield sites is completed more than six months quicker.

This new research illustrates that prioritising investment in brownfield sites is a highly effective way of building the homes we need. The research undermines claims that brownfield is either too slow or inconvenient to develop in comparison to greenfield.

In Hart’s case, it is also clear that brownfield sites have a much better chance of meeting the actual housing needs of the people of Hart, as it is much more likely that they will deliver the ~3,800 much needed, smaller 1 and 2-bed properties for the young as well as specialist units for the elderly that make up around one third of our housing need.

The case for a brownfield solution to our housing need gets stronger by the day.

As a result of this research, CPRE calls for changes to Government policy: