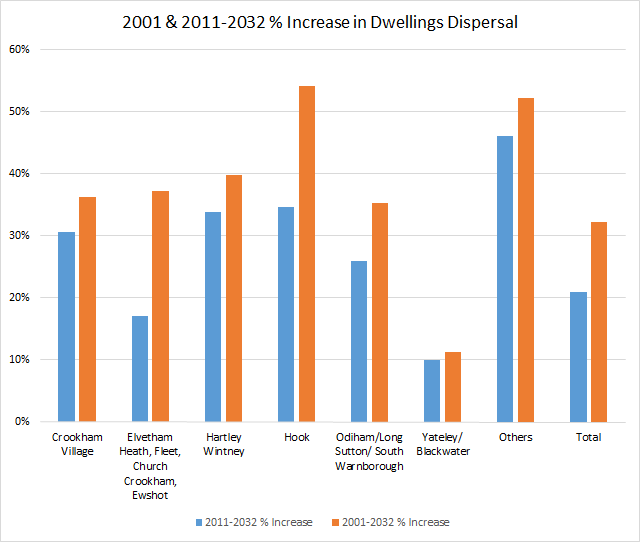 Our previous posts (here and here) about the level of development that will be faced by the different parishes under the different development proposals put forward by Hart District have been criticised for two reasons:

The answer to the first point is that unfortunately, Hart have only provided the development from 2011-2015 in the parish groupings shown, so there is no other way of presenting the data and still maintaining accuracy.

In answer to the second point, we have now incorporated the census data from 2001 into the calculations, so now it is possible to see the percentage increase in the same parish clusters from 2001-2032 and from 2011-2032.  The results in graphical and tabular form are shown above and below. This data for dispersal shows that Fleet, Church Crookham and Crookham Village will not take more proportionate development than many other areas of Hart such as Hook, Hartley Wintney and the “Other” rural districts.  But it does show that Yateley and Blackwater have taken least proportionate development over both time periods and the smaller rural districts would take a very large proportionate increase if this strategy were pursued to the fullest extent.

First, the dispersal approach, the graph is shown above, and the table below:

Second, the urban extension approach below. This shows that Hook will take the largest proportionate development using this approach over both time periods and Crookham Village will also see a very large proportionate increase in housing. Again Yateley and Blackwater are relatively unscathed, with the smaller rural districts taking relatively little proportionate development.  This would point towards a need for some more dispersal towards those districts, but not to the full extent described above: 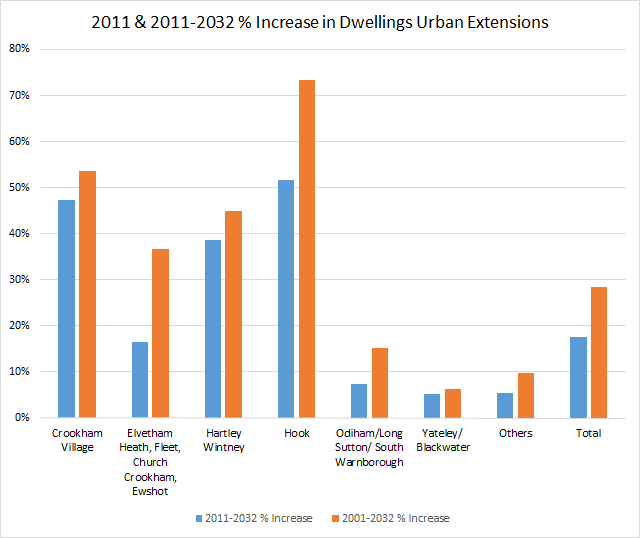 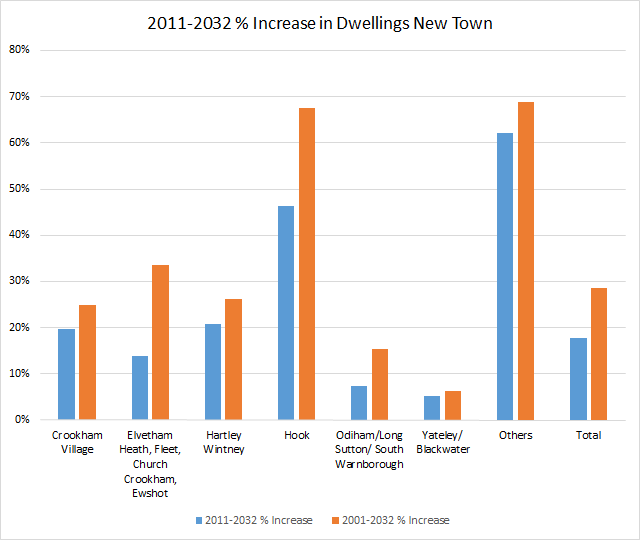 If you would like to ask Hart to abandon the new town and urban extension ideas and create a brownfield solution to our housing needs, we urge you to respond to the Hart District Council consultation about the Local Plan and ask them to think again. We have created a dedicated consultation page and updated our two guides to responding to the consultation that are available on the downloads below. The comments are designed to be cut and pasted into the boxes provided. It will be very powerful if you could edit the comments into your own words. Please do find time to respond to the consultation and play your part in saving our countryside.